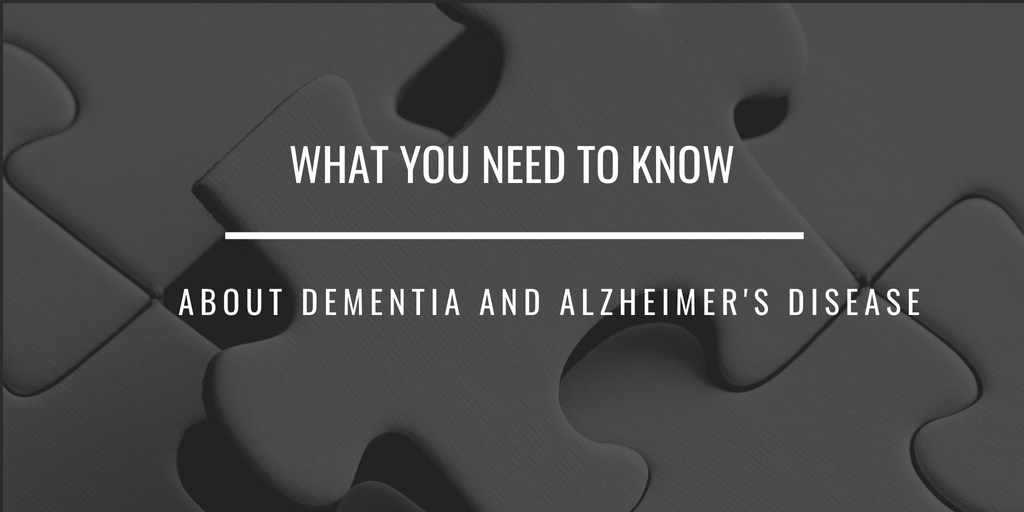 You’re at a family get-together when you notice something is not right with your usually sharp-minded and witty mother. She didn’t remember that her first great-grandson was born a few months ago or the name of the neighbor who has lived next to her for twenty years. She tried to tell you about her trip to the supermarket but stumbled through the story and repeated tiny details. When do you attribute these things to old age, and when do you begin to wonder it’s something more?

According to the National Institute on Aging, dementia is the dying of brain neurons which results in the loss of cognitive functioning. This includes thinking, memory, and reasoning skills, as well as behavioral changes that interferes with daily life and activities. Individuals with dementia struggle with:

Dementia is not a disease, but a collection of symptoms that can be caused by other diseases. Dementia is an umbrella term that encompasses many diseases, including:

What is Alzheimer’s Disease?

Alzheimer’s Disease (AD) is the most common form of dementia, affecting 5.7 million Americans. Although AD can develop in persons younger than 65–called Early Onset Alzheimer’s–96% of cases are in individuals 65 or older.

AD occurs when certain proteins build up (called plaques and tangles) on the brain neurons, disrupting communication and ultimately leading to neuron death. While most people develop some plaques and tangles as they age, those with AD have many more. They develop in the areas of the brain that are responsible for memory and then progress to other areas of the brain, causing personality changes, difficulties with activities of daily living (ADLs), and the other signs of AD.

Since there is no cure for AD, the plaques and tangles continue to spread through the brain, killing more and more neurons. Unfortunately, the prognosis for AD is poor. Life expectancy after diagnosis depends on many factors; most people live 4 to 8 years, while some can live up to 20 years.

The 3 Stages of Alzheimer’s Disease

AD progresses through 3 stages. The time in each stage varies depending on the person, their treatment, and other factors.

The first stage is called Mild of Early-Stage AD. In this stage, the individual is able to maintain a functionally independent life, however, family and friends will start to notice difficulties in the individual’s concentration, communication, and memory.

The second stage is called Moderate or Middle-Stage AD. This is the longest stage, and can last for years. The individual will require a greater level of care, as they struggle with greater memory loss and confusion, bowel and bladder control, and wandering tendencies. Perhaps the most difficult decline to observe is the change in behavior, as the individual becomes moody, delusion, compulsive, and angry, often becoming someone that loved ones don’t recognize.

The last stage is called Severe or Late-Stage AD. Unfortunately, the individual no longer interacts with their environment. They cannot carry on a conversation, perform personal hygiene, and eventually lose the ability to move. Behavioral changes and memory loss also continue to get worse. Because of these significant challenges, the individual will need 24-hour care for all their needs.

What Can I do if I suspect Alzheimer’s Disease?

While there is no cure for AD, early detection is vital to helping the affected individual have the best quality of life.  The Alzheimer’s Association lists 10 early signs and symptoms of AD. They are:

If you suspect dementia or Alzheimer’s Disease for you or a loved one, make an immediate appointment with a doctor. If AD is diagnosed, you can create a care plan team of doctors, nurses, specialists, therapists, nutritionists, support groups, and more. These professionals aid the individual and their family through drug and non-drug measures to slow the progression of the disease and keep them healthy for as long as possible.

Dementia is an umbrella term that encompasses many diseases that result from brain neuron death. Alzheimer’s Disease is the most common form of dementia. While there is no cure for dementia or AD, early detection improves the individual’s quality of life. Early drug and non-drug interventions slow the progression of the disease. If you suspect dementia or AD for you or a loved one, make an appointment with a doctor!